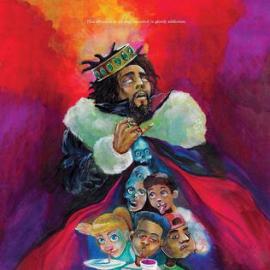 K.O.D is North Carolina rapper J.Cole’s latest attack on his personal demons, a crusade that was conceived during his 2016 project ‘4 Your Eyez Only’, in which he sets his sights on his largest obstacle; addiction. Dropped on 420, from start to finish the project is a scathing attack on the glorification of drug abuse in the hip hop community, and the culture that it has perpetuated.

An introduction to the album saunters into existence, comprising of a disembodied female voice warning of the dangers of being unable to cope with life’s challenges, and a Miles Davis esque saxophone melody. It sets the message of the album well; almost too well, to a degree where some listeners may find it obtuse due to the lack of subtlety. Cole’s title track also suffers the same problems, as it establishes the little vignettes of female vocals that will punctuate most of the album, although the aggressive delivery that drips attitude and defensiveness makes it at least very listenable. The lethargic trap drums that make an appearance on Photograph are another demonstration of the counterculture that Cole attempts to curate, yet with more subtlety, and remains relatable and modern.

Speculation about the unknown rapper kiLL edward’s features is resolved on The Cut Off and FRIENDS, turning out to be a pitched down version of Cole’s vocals, which provides the self confessed ‘platinum with no features’ rapper with the perfect voice to bounce of off; himself. Lyrically, it’s nuanced, with Cole using the voice of his alter ego to become self aware and acknowledge his weaknesses, his temptations and his failings, but it’s let down by the dreary production. Obviously aware to the unpalatable soundscape, Cole injects a little energy into the album with the ATM, a catchy song with delivery that swells and flows well, and is reminiscent of 2014 Forest Hills.

Perhaps the weakest element of K.O.D is the production. There’s two sides of the coin, and for every listener who enjoys the conceptual and minimalist approach, they’ll be another who’s deterred by it. Gone are the lush and fruity sounds of 2014, replaced by flatter sounding piano and somewhat apathetic jazz elements. More mature sounding? Maybe. Less likely to create a radio hit? Almost definitely.

And that’s where my problem with J.Cole’s fifth studio album lies. It suffers from the exact same sleepy cohesion that made 4 Your Eyez Only sound sonically like one single, drawn out song. While the message is commendable, how many less people will hear it because they’re put off by the unapproachable beats? J.Cole may be the champion of old heads who like to be nostalgic about how much better past rap was, but he’s managed to create forty two minutes of minimalist music that disregards all of the culture that rap has spawned, for better or for worse, depending on the listener. It’s unapologetic and stubborn, yet if Cole was able to wear his influences on his sleeve less, and compromise on a couple of features, K.O.D could have been a timeless classic. By no means is it a bad release, but it will continue to fail to convince past critics that J.Cole is creating anything that Kendrick Lamar hasn’t already done. Kid On Drugs is a powerful, sincere release that’s hindered by its uncapitalised potential; and I fear that’s what J.Cole wanted.