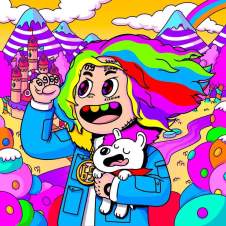 Is it a coincidence that the release of Brooklyn rapper 6ix9ines latest track, GOTTI, has lined up with the emergence of the first rays of sun this year? Perhaps, but between the calmer, melodic vocals, the healthy dose of autotune and the fruity beat seems like a tactical decision by 6ix9ine’s management, who posted the track, to capitalize on the summer market with a more radio friendly song.

Gone are the obnoxious gun samples and aggressive vocals which characterized his debut album, Day69. In their place is a strange introduction of autotune assisted harmonies and spaced out synths, which is surprisingly an unwelcome change. While it may show 6ix9ine’s somewhat ability to switch up his style, it lacks his signature aggression that made his other tracks, such as GUMMO and BILLY listenable and somewhat catchy. The newfound clarity to 6ix9ine’s vocals is ultimately a waste of time, for he continues to say nothing that listeners haven’t heard before. Making sure to use every trap lyric stereotype possible, the track is packed wall to wall full of boasting, about success, riches, how he can take listener’s girlfriends, and a shopping list of his drug habits. With the inclusion of three references to Scum Gang and a couple of mentions shouting out his testicales to increase his internet fame, GOTTI’s lyrics are as formulaic and unoriginal as any other of 6ix9ine’s tracks, except they’re unfortunately easier to hear.

Thematically, the beat, which is likely created by Flamm, fits the hazy, dream world aesthetic of the full length project. The sugary, glittery synths and piano chords combined with the xylophone pattern are fitting, although the obvious sample loop can be a tad jarring at times.

At this point, it would be a blessing if 6ix9ine is unable to record bland, boring tracks such as GOTTI for the next three years, especially when they lack any of the qualities that made their predecessors somewhat catchy. Yuck.