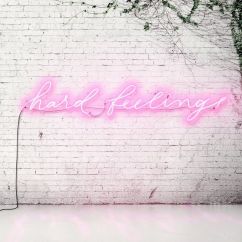 Rise Records isn’t exactly renowned for their creativity, to such as degree that the term ‘Risecore’ has been spawned into existence, to aptly describe the generic metalcore sound that has saturated the market. You can imagine my apprehension then when I saw that Arizonian Christian rockers Blessthefall had become Rise’s latest acquisition, after leaving Fearless Records. Was I right to be worried? Thankfully, no, and Hard Feelings proves this with ten songs that maintain that the right balance of originality and listenability.

The structure of the tracks won’t be a shock – it’s a classic blend of screaming vocals with angstily sung choruses, but the production manages to remain refreshing without overstepping its bounds into EDMcore. This execution can be best seen on tracks as I’m Over Being Under(rated) or Feeling Low, where the electronic elements are interesting but avoid becoming jarring or overwhelming. Bea Boken’s vocals rarely feel drowned out by the mixing or the instruments, even when the songs climaxes in the richest breakdowns, such as on Cutthroat, which is perhaps the most traditional track on the release, and is sonically quite similar to prior releases such as You Wear A Crown But You’re No King.

Notably, this feels like one of the most listenable metalcore albums released in a while as it is dripping with post-hardcore energy without being aggressive for the sake of edginess. Following this, the lyrics are a little more mature, such as on the more poppier track Sleepless In Phoenix, where Bea addresses being older and having a family and having to be on the road. On that note, it’s worth pointing out that although it is less aggressive than Witness, and especially Hollow Bodies, it’s not much more radio friendly, proving that Blessthefall aren’t following the precedent set by former metalcore act Bring Me The Horizon in 2015. This faithfulness to their sound will please hardcore fans of the band and the genre alike, and it’s commendable, even if the album art will have listeners expecting an off brand 1975 release!

In short, if you ever enjoyed Blessthefall’s previously releases, this project is a safe bet, and probably will end up being one of the more interesting and appealing metalcore releases this year. My gut feeling is that metalcore probably peaked in late 2013 and has since lost a lot of it’s fan base, but Hard Feelings could end up conjuring up some nostalgia for older listeners. In reality it’s not an exceptional album, but it’s novel production and lyrics makes it worth a listen.